Introduction
Chaplains have been serving the students, staff and families of government schools across Australia for decades – long before the much appreciated federal funding commenced in 2007 – making a valuable contribution to the social, emotional and spiritual wellbeing in school communities. They have played a vital role in complementing other school-based wellbeing support services in two important ways:

1. Chaplains fit well with other wellbeing supports by promoting social, emotional and spiritual wellbeing services, alongside other support services that do not specifically focus on spirituality as an important aspect of wellbeing.

In the recent independent evaluation of the National School Chaplaincy Programme (NSCP) Evaluation commissioned by the Australian government, school chaplaincy services were considered to be “most effective in supporting the social and emotional wellbeing of students” (Kantar, 2017, p.14). More specifically, principals and parents said that the services made a significant contribution to the provision of on-going support for individuals; assisting students in dealing with crisis/loss situations (e.g. – family breakdown, death); creating a caring learning environment; modelling and teaching moral values; and contributing towards the morale of the school.

When asked to identify the positive aspects of having a school chaplain, students themselves identified that the program provided:

1. A spiritual-ecological approach; and
2. A promotion, prevention and early intervention focus.

A Spiritual-Ecological Approach
NSCA school chaplains take a ‘spiritual-ecological’ approach to the wellbeing of children and young people. Broadly speaking, ecological approaches explore the various influences on a person’s development within the context or ‘ecology’ of the complex system of relationships, networks and systems that make up their everyday life (Hoffnung et al., 2013).

Beyond the individual as a physical, psychological, emotional, social and spiritual entity in themselves, a child or young person’s ecology is understood to consist of their friends and family; their school, social groups and local community networks; and broader socio-economic, political and cultural influences (Health and Aged Care, 2000).

This spiritual-ecological approach acknowledges a number of domains of influence on a child and young person’s life. These are:

Many secular ecological approaches to child and youth wellbeing give little attention to the spiritual dimension of life, but a key feature of a school chaplain’s approach is that it gives emphasis to spirituality.

NSCA school chaplains place a high value on the child or young person’s personal spirituality, that is, their personal spiritual health, beliefs, values and practices and how these impact upon their overall wellbeing, while also acknowledging and valuing spirituality as it is expressed in the relational, communal and societal domains of their lives.

In education and wellbeing circles, there has been an increasing awareness of the importance of spirituality in the lives of children and young people and of the links between positive spirituality, development and wellbeing (Chen and VanderWheele, 2018; MCEETYA, 2008; VicHealth, 1999).

While interest in spirituality has grown, clear definitions of spirituality are often vague or contested. Despite that, common themes associated with spirituality include: a sense of meaning and purpose; a sense of connectedness to self, others, nature and the divine; a search for hope, harmony and
wholeness; a sense that there is more to life than what we can see in the material world; and a belief in a higher being or beings (Cornah, 2006).

Spirituality is not supposed to be something strange or foreign, but something essential and integrative, pulling the various facets of our lives together in useful, meaningful ways. (Stuart and Nash, 2002). 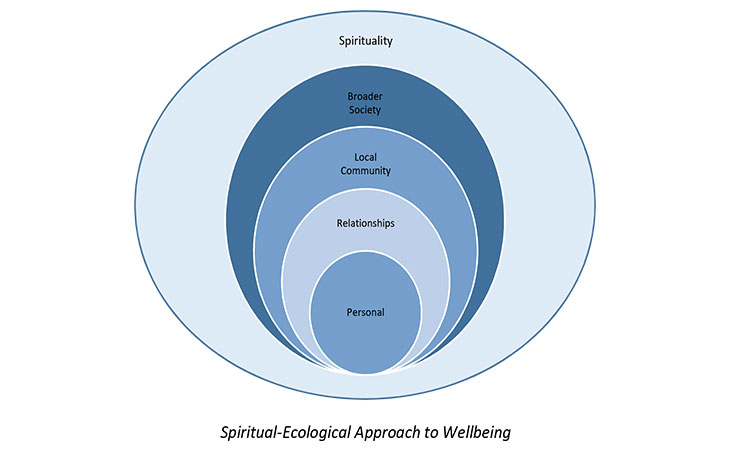 Positive spirituality has been shown to contribute to good health, mental health and long life, as well as aid recovery from general health and mental health issues. Research also shows that spiritual and religious practices like experiences of divine support and guidance; prayer and meditation; church attendance; engaging with sacred symbols and texts; acting out pro-social and pro-health behaviours; and participation in the life of religious communities also contribute to a person’s health, mental health and general wellbeing (Cornah, 2006; Kaldor, Hughes, Castle and Bellamy, 2004).

The importance of spirituality to child and youth wellbeing has been recognised for many years in various international declarations and conventions. Article 14 of the United Nations’ Convention of the Rights of the Child says that children have the right to their beliefs and to practice their religion of choice. The role of parents in providing religious and spiritual guidance is also acknowledged, as is a child’s right to develop their own views as they mature (OHCHR, 1989; Children’s Week, 2013).

In Australia, we have a unique spiritual landscape that has changed much over recent time and continues to change today. In terms of the outworking of spirituality, Australia has a clear ‘Christian’ heritage and an emerging ‘multi-faith’ flavour.

Current discourses around ‘hard non-inclusive secularism’ promote the exclusion or limitation of religion and spirituality from public life (Sempell, 2012; James and Benson, 2014). These cultural mindsets encourage spiritual fragmentation in our nation’s people and a societal context that fails to value the positive influence that spirituality can bring to people’s personal and communal lives.

Alternative conceptualisations of ‘pluralist inclusive secularism’ encourage the participation of the full range of religions. spiritualities and world views, but without promoting any one particular set of beliefs and practices above others (Roberts, 2008).

The National School Chaplaincy Association affirms that pluralist inclusive understanding of secularism that is consistent with a modern democratic, pluralistic and ethno-diverse vision of Australia; one that affirms a ‘freedom of religion’ rather than a ‘freedom from religion’. This is also the vision for education in the Melbourne Declaration on Educational Goals, when it pictures a government school system that is holistically concerned with the ‘intellectual, physical, social, emotional, moral, spiritual and aesthetic development and wellbeing of young Australians’ (emphasis added). This is a right all children should enjoy, including those who attend government schools.

It is also the approach adopted in European human rights, as a neutral pluralistic option: ‘Neutrality requires a pluralist approach on the part of the State, not a secularist one. It encourages respect for all world views rather than a preference for one. … A preference for secularism over alternative world views – whether religious, philosophical or otherwise–is not a neutral option.’ (Lautsi v. Italy 18 March 2011, per Judge Power)

The NSCA affirms a cultural environment that promotes – at the choice of a student or parent, consistent with the operation of both human rights, and the national school chaplaincy program – the integration of spirituality into everyday life, as well as our shared public life, allowing Australians, where they so choose, to increasingly benefit from what spirituality has to offer in these spaces (Berger, 2012; Roberts, 2008).

In practice, this means that school chaplains work with children and young people respecting their views and choices, and in such a way as to prioritise attending to the spiritual dimension of their personal lives, so that they might benefit from our best efforts to promote their wellbeing in society.

A Promotion, Prevention and Early Intervention Approach
NSCA school chaplains take a ‘prevention approach’ that focuses on “promotion, prevention and early intervention” or “PPEI” activities (Health and Aged Care, 2000, p.19). In this approach, ‘promotion’ in mental health is any action taken to promote wellbeing by promoting protective factors. It is concerned with children and young people who are currently going well in life, those who are ‘at risk’ of experiencing wellbeing issues and those who are already experiencing wellbeing issues (Health and Aged Care, 2000; Sanson, Havighurst and Zubrick, 2011).

The terms ‘promotion’ and ‘prevention’ are used almost interchangeably, but ‘prevention’ is more focused on the reduction of risk factors when there is some perceived risk (Bland, Renouf and Tullgren, 2009; Health and Aged Care, 2000). 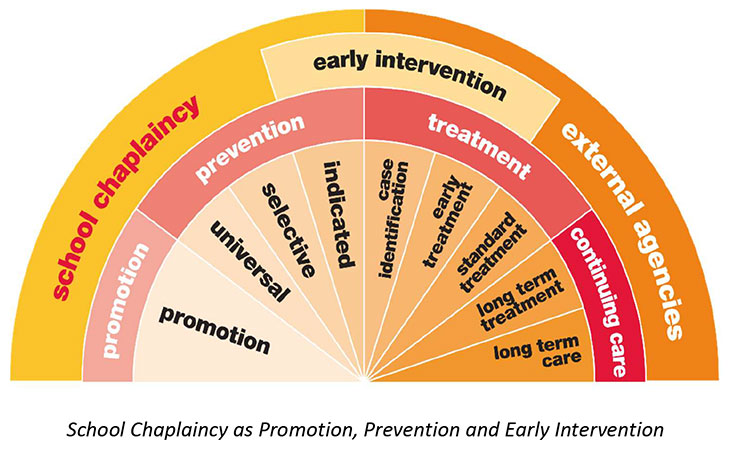 PPEI approaches focus their attention on circumstances where there are either no signs or early signs of wellbeing issues. Collectively as ‘PPEI’, these approaches seek to prevent the onset or reduce the development of negative wellbeing issues (Health and Aged Care, 2000). Head and Redmond argue that social research, professional experience, policy practice, economic reasoning, moral reasoning and common sense all support a focus on PPEI in relation to wellbeing issues (2011). There is strong evidence to suggest that focusing on PPEI in mental health and wellbeing engagement, as opposed to focusing on high cost and sometimes ineffective treatment approaches, will improve mental health and wellbeing outcomes for all Australians, including children and young people. (Head and Redmond, 2011; Health and Aged Care, 2000; Sanson, Havighurst and Zubrick, 2011).

In practice, this means that school chaplains are often engaged in a range of activities different to those of other helping professionals in schools. They often provide flexible, accessible, informal PPEI services for individuals and groups that are not readily provided by more formal school-based mental health provision services.

In this way, school-based psychologists or counsellors work in a space that typically is different from school chaplains when it comes to wellbeing services in schools. The day-to-day work of the chaplain sits on a different part of the mental health intervention spectrum, complementing the other supports available to students.

Conclusion
The Melbourne Declaration on Education Goals contemplates a system of government schooling that nurtures ‘an appreciation of and respect for social, cultural and religious diversity’, rather than being a place where the spiritual dimension of a child’s development is ignored, marginalised or excluded.

In this way, chaplaincy services in government schools have made a significant contribution to achieving the principles of high quality education. School chaplains should continue to play a vital role in the ongoing promotion of social, emotional and spiritual wellbeing of students, staff and families connected to government schools across Australia.